Kathmandu : Last rites of Nepali Congress leader Nabindra Raj Joshi have been performed at Pashupati Aryaghat on Saturday. Deceased Joshi’s brother Raju Raj Joshi and nephew Saurav Joshi lit the funeral pyre. Body of Joshi was put at his residence Yakyatole and NC central office in Sanepa for people to pay their final tributes to his mortal remains.

Joshi died on Friday evening at Norvic International Hospital at the age of 57. He had suffered a brain hemorrhage. Born in Kathmandu on 17 June, 1962, Joshi, former minister and NC central member, was elected to the House of Representatives in elections in 2064 BS and 2070 BS from Kathmandu constituency 8 having served as General Secretary of the Nepal Student Union, student wing of the NC. He is survived by his wife and daughter. 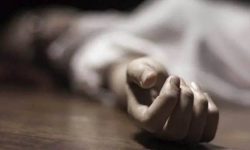