Taking charge of office at the Province Chief office in the capital city, Pokhara, Poudel said she would discharge the responsibility of the head of the Province keeping into consideration the existing acts, rules and laws. Noting that she would move ahead in an independent and impartial way for the resolve of problems surfaced in the province considering the prevailing laws, Poudel sought support and cooperation from all sides to that end.

Also present on the occasion were province minsters, deputy speaker, high-placed government officials, security bodies chiefs and chief district officer. A contingent of Nepal Army had offered her a guard of honour on the occasion. Poudel took the oath of office from the President on May 3 and arrived Pokhara on Tuesday 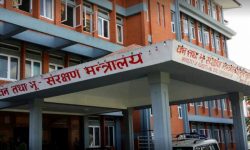