According to his family sources, journalist Adhiakri, 40, of Ghorahi sub-metropolis-17, Belbhar died on Tuesday night while undergoing treatment in Kathmandu.

Adhikari had cast his vote from Dang in the April 7 election to the Federation of Nepali Journalists (FNJ).

He was diagnosed with coronavirus infection in the PCR test done at the Rapti Institute of Health Academy Ghorahi on April 8.

Adhikari was airlifted to Kathmandu via helicopter on April 16 for further treatment after his health condition was worsening.

Adhiakri has long been working for Gorakshya National Daily. Only one son of the family, Adhiakri is survived by his spouse, a son and a daughter. (RSS) 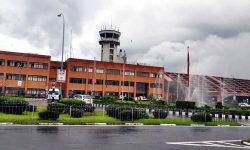