After visitors’ uptick, Barju lake gets facelift as new destination in eastern Terai

Itahari : Located at southernmost part of Sunsari district, Barju lake was not a known name until a decade ago. These days, it is one of the crowded travelling destinations in eastern Terai. The local government, Barju Rural Municipality, is also named after this vast lake. This lake covers an estimated area of 152 Bighas in Barju Rural Municipality-6 Chimadi village.

There are three rows of parallel lakes. The lakes’ area is 32 Bigha, 45 Bigha and 75 Bigha respectively. Picnickers, bikers and travelers reach this must-visit place and go round the lake area via vehicular lane that is 4.5 kilometers long. The lake has two gates- southern and eastern. Southern entry point is connected with blacktopped road whereas eastern one has 1.5 kilometer stretch left for blacktopping, said Binod Chaudhary, the ward chairperson and an active lake conservationist since long.

Individual visitor is charged Rs 20 for entry. And for picnic vehicle, the fee is within the bracket of Rs 300-500, said chairperson Chaudhary. He said 152 species of migratory birds were recorded at Barju lake area. Because of its accessible location from major cities of Morang and Sunsari with Biratnagar just 10 kilometers away, Duhabi 11 kilometers and Inaruwa 18 kilometers, Barju has seen growing visitors each year.

”We have dozens of newcomers every day. There was a day when we recorded 150 thousand visitors in a single day,” informed ward chairperson Chaudhary. He added, ”We take leadership role at the management of the lake since Kartik (mid-November) and have collected Rs 1.6 million revenues. Previously, it was managed by an NGO.” Chairperson Chaudhary said local government is happy to get new sources of touristic revenues from the lake. Local government is in need of mega investment Barju lake is a famed lake.

It is widely loved by visitors from across the eastern Terai. Recently, Umesh Bhandari from Dharan was at the lake area clicking selfie and filming his TikTok video contents. About his Barju travel, he said, ”This is my first time here. What I found is this lakes needs huge touristic and infrastructure investment to draw more visitors.” Ward chairperson Chaudhary agrees with Bhandari. He said federal government must invest on few mega projects at the lake. ”Prime Minister KP Sharma Oli has visited this lake and has promised to invest more here,” chairperson Chaudhary said, ”We are still awaiting the investment.”

Prime Minister Oli has visited the lake on 3 Chaitra 2075 BS. He has talked about the legend of the lake linking with Mahabharata. He said the five Pandava brothers had arrived at Barju Lake to quench their thirst and the question-answer was ensued between Yudhisthira and Yaksha. Chairperson Chaudhary said, the previous and ongoing investments at the lake only amounts few crores rupees only.

It has constructed a beautiful children’s park, which was formally inaugurated on 28 Poush 2075 BS by the former Deputy Prime Minister Bijaya Kumar Gachchhadar. The park charges Rs 30 for an individual entrance. Besides the children’s park, Ward Office has ended private ownership at the managerial role of Barju lake management. ”Until last year Barju lake’s revenues and all management was operated by an NGO. We struggled hard to push them away to make our own leadership and got success,” said elated chairperson Chaudhary.

He added, ”We are making good revenues streams. We make around minimum of 4 lakh revenues every month. After pandemic is eradicated, our revenue flows would be bigger than what we have these months.” Five management staffers are involved in day-to-day activities at the lake, he informed. For further revenues, ward office is mulling on leasing pond for fisheries. ”We have 152 Bigha land and we are afoot to lease out this area for locals to eke out their living”, said chairperson Chaudhary.

He added, ”We are planning to lease on Rs 95,000 per year. With this rate, we are going to make Rs. 1.5 crore revenues annually that is a big respite for various developmental activities over here.” Among the various ideas floated by the local government ward office, touristic facelifts to the lake are constructing four islands, erecting an excellent standard island auditorium, cycling lane and environment-friendly walking tracks.

”Since this lake is not only close to big cities of Province One like Dharan, Itaharai and Biratnagar but also close to international borders with southern neighbor India”, said ward chairperson Chaudhary, ”Because of this accessibility and its significance, we need to make this destination a world-class. To do so, we need billions of investment for which we are pinning our hopes on both provincial and federal governments as well as international donor agencies.” 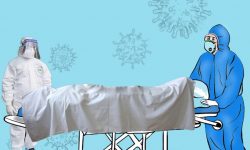